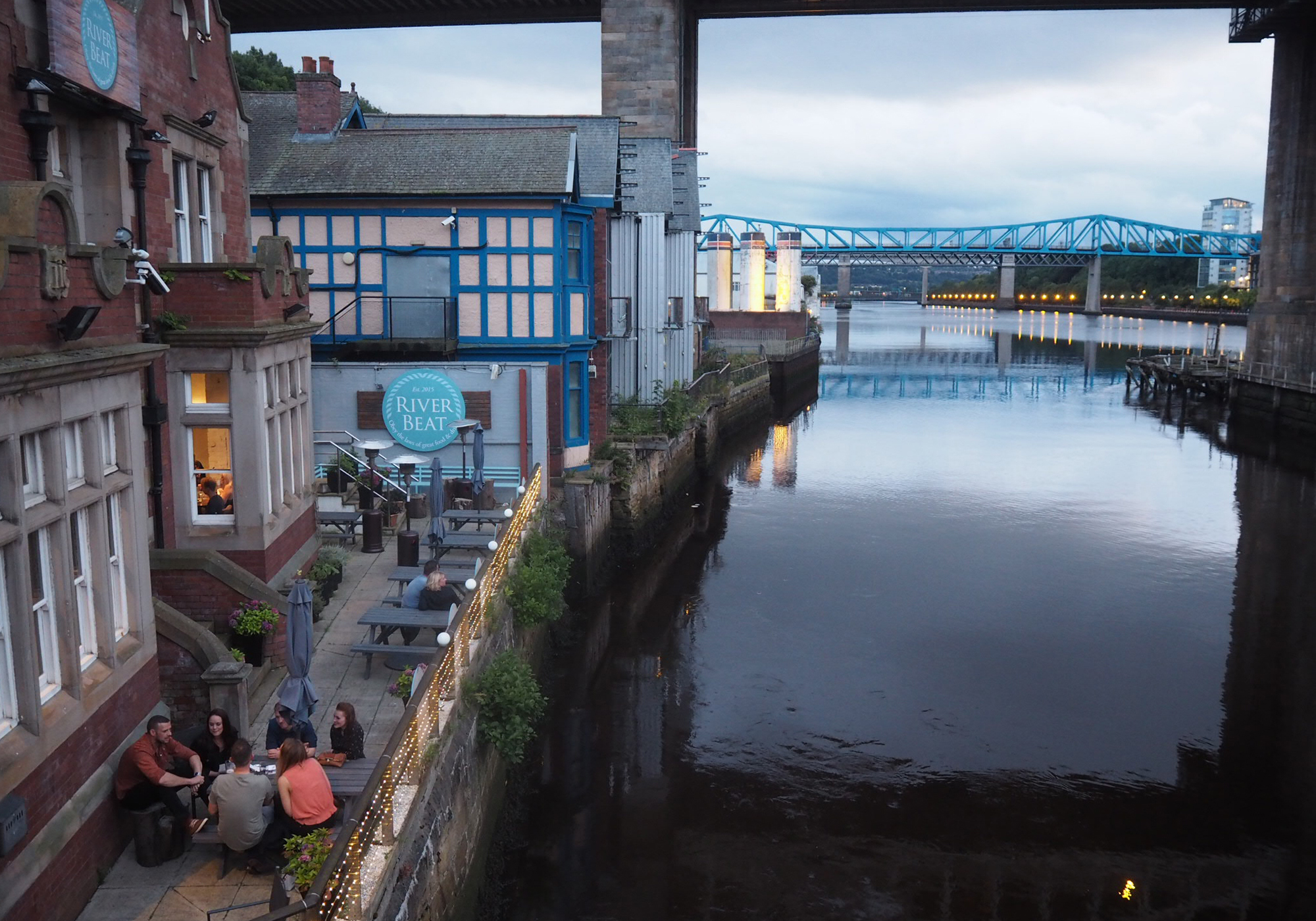 This weekend, me and Mark had the pleasure of sampling the authentic Thai cuisine of River Beat, Newcastle.

Now, we both love our food equally. But our tastebuds have different ideas. So this review should give you a flavour of the food, from varying perspectives.

While I had been longing to go to River Beat for a while - after overhearing the positive opinions of my colleagues - I didn't have any preconceptions. I wasn't even sure exactly where to find the restaurant and hadn't done my usual trick of scouring the menu in readiness. So I went with an open and un-tainted mind.

We walked along the Swing Bridge at 7pm, to find the restaurant inconspicuously tucked away on the Gateshead side of the river, where it has been residing for a short 2 years. The building resembles an old pub from the outside and the entrance wasn't immediately obvious. So the impression the inside made was all the more magical. The contemporary interiors are a stark contrast to its traditional outer. Obey posters and pop art adorn the walls. And ambient beats play in the background. Giving the place a cool, but sophisticated finish. We were led to a window seat, which overlooked park benches positioned next to a fairy-lit riverside. Perfect for quiet, summer evening cocktails. The Castle could be seen in the distance and added to the feeling that we were somewhere special, private and different.

I ordered a gin fizz cocktail, which wasn't as sharp as most citrusy mojitos and was noticeably softened by the sweetness of the berries. Mark ordered a Lagunitas IPA - despite my best efforts to get him to test out another of the cocktail options. But he was satisfied.

The menu recommends 3 tapas each. So who were we to argue? The tapas menus were split between the normal 3 for £15 and the gourmet, 3 for £21. We stuck to the standard menu (if you can call it that), of which the dishes sounded no less tempting. Between us, we ordered a good collection of meat and seafood. As I mentioned, me and Mark have different preferences when it comes to food and I knew at first glance that the fish dishes were made for me. However, he'll eat pretty much anything that's put in front of him. Meaning we're able to give you both sides of the coin. So without further ado, here's a round-up of our evening at River Beat.

For a non "fishy fish" fan like Mark, the squid was ideal. The batter was crisp, but not at all hard and the squid itself was soft and not at all chewy. Just how it ought to be. The coating was salty, spicy and had the perfect amount of seasoning. The little red chillis and spring onions added a kick to the dish, which was balanced by the rich, sweet, plum and tamarind dip. Thumbs up from this squid supporter. And her not-so-fish-fanatical friend.

I'm always a little apprehensive of belly pork. It has a bad habit of being chewy and fatty. But I really can't recommend this dish enough. It was cooked to absolute perfection. Crunchy but incredibly soft and packed with flavour. Accompanied by hoisin sauce and a spring onion garnish, the pork meat stole the show for us. In fact, we were tackling each other for it by the end and both agreed we could've easily eaten a platter of the stuff. Mark's statement between mouthfuls should sum it up for you: "I just need this in my life forever" - he said. And I couldn't disagree.

The name should've prepared me really, but the bhajis were too sour and citrusy for me. On the other hand, Mark found them refreshing. And amongst the deep, rich flavours of the meat, I can understand why. The vindaloo dip wasn't too hot, but pungent and offset some of the bhajis' bitter, pickly taste. Mark found the dip more flavoursome than spicy, although his tastebuds definitely cope better with spice than mine. So I'd suggest testing a little first before any dipping or dunking, if you're a bit on the spice-sensitive side.

Despite being a fish fanatic, the chicken skewers would've definitely been on my wishlist if Mark hadn't ordered them. As anticipated, the chicken was moist and soft. The crunch of the peanuts made for a perfectly balanced mouthful. I found the peanut butter sauce mouthwateringly moreish, but not spicy as advertised. Which was fine by me. The simple garnish of onion, beansprouts and coriander was delicious and completed the dish. If you like satay chicken, you can't go wrong with this order.

The cod fritters fell a little flat for me. I was unsure of the coconut and sweetcorn concoction, but - of course - Mark disagreed with me. The loa cherry tomato purée was spicy and a little overpowering for the delicate cod, but unarguably added to the different dimensions of the dish. And exemplified the eclectic spirit of the restaurant.

The fish cakes caught my eye on the menu almost instantly, but it was probably the dish that caused the most disagreement between me and Mark. The fish cakes themselves were salty and spicy on their own, but the accompaniment of pickled fennel & lime leaf dressing was too acidic for my liking. Mark, however, loved it. He is a beetroot fiend and I often find him huddled conspicuously round the fridge, fork in hand, jar of pickled onions in the other. So, you get the idea. The fish cake itself, I liked, but would've preferred a different garnish.

So, with our conflicting conclusions, our top 3s were as follows:

The pork belly was a clear winner for us and we'd also highly recommend the squid. Between us, we were both equally satiated.

One thing we both can definitely agree on is a cheese board for dessert. And this one did not disappoint. We were presented with a selection of 3 cheeses, a brie, a blue and a cheddar. The crackers were crisp and salty, the chutney thick and sweet and the cherry tomatoes delicious. I also have to point out that this was the first time I have found celery edible. The cheeses weren't overpowering, but so flavoursome and topped off the meal. For sweet tooths, the palm sugar soaked Thai rice pudding with peanut butter syrup and salted caramel ice-cream sounded incredible.

I was thrilled to see the locally-sourced, Ouseburn Coffee Co on the menu and couldn't resist a cappuccino. Which was intense, creamy and dusted with chocolate powder. A really satisfying end to the night.

All in all, a flawless evening with an eclectic and enticing menu. There's something for everyone here: salty, spicy, sweet or sour; we are a good example of that. And we still have the gourmet and curry menus to explore! I can't thank River Beat enough for letting us experience their beautiful restaurant and there's no doubt in my mind that they'll be sick of the sight of us soon enough.

Have you been to River Beat? Let me know what you'd recommend trying for my next visit.