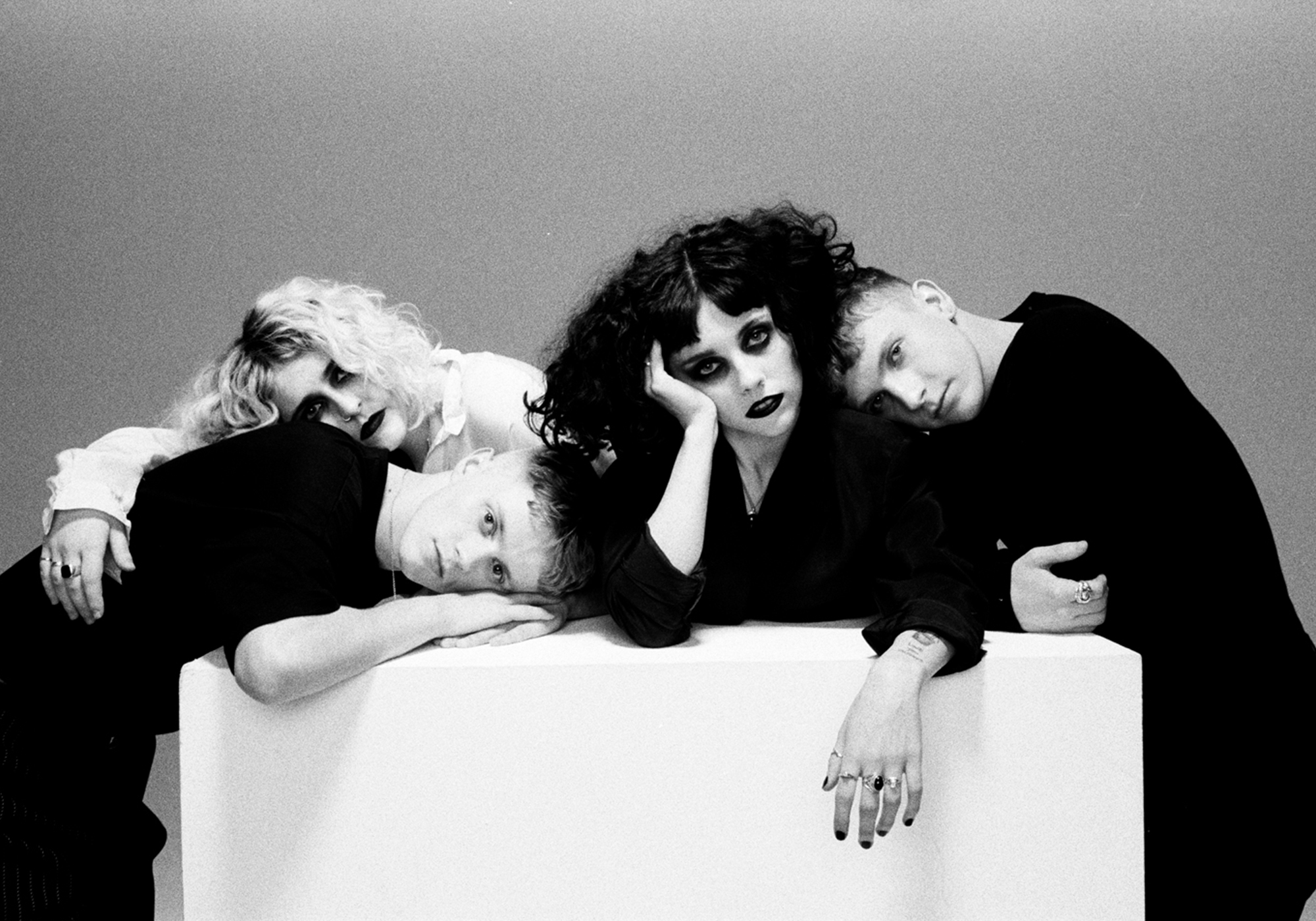 Following in the well-trodden footsteps of Live at Leeds and The Great Escape, Hit the North is the North East’s largest inner-city music festival. After debuting during May bank holiday in 2017 and attracting over 3,000 to the event, Hit the North returns from 4th-6th May 2018.

The festival will commence with 3 opening parties on the Friday. At the 02 Academy, you can catch Liverpudlian-formed indie rock band, Circa Waves. As the title of their 2nd LP, Different Creatures suggests, the record speaks less of youthfully recalling T-shirt weather and more of goodbyes and lost memories. Despite the look at timely topics such as male depression and immigration, the album ends with the forlorn plea to talk shit and get drunk with old friends. The band may not be young chasers anymore, but they’re not ready to give up on their youth just yet. Support on the night will come from British-Australian indie band Sunset Sons, who’s new album, The River EP, is due for release later this year.

As part of their international tour that spans Northern America, Europe and the U.K., Jungle will be bringing their uplifting blend of funk, soul and mellow beats to the Boiler Shop on 4th May. Their tranquilising kaleidoscope of percussion and synths will be the perfect pre-cursor to the weekend. Sultry numbers like ‘Smoking Pixels’ and ‘Crumbler’ will sound all the better with one of the venue’s craft ales in hand.

The third opening party comes from brothers Drenge, who will play at Riverside. The venue sits on the banks of Newcastle’s historic quayside and is a hot and sweaty favourite with local gig-goers. It’s gonna get sticky in there when the prickly, punky chorus of ‘We Can Do What We Want’ arrives. Whatever you do, don’t wear new trainers.

May 5th celebrates some of the best talent to ever call the North of England home. Meet the North is a chance to come up close to your new favourite band before they get too famous. Last year, Newcastle-based trio Old Pink House were one of the emerging talents of the day, who will play the 3:15-3:45pm set this year at the O2 Academy. Their latest release Expectations is one of my favourite tracks of the year so far.

Whether it’s sunny or not on the day, Corella’s peppy indie-pop tracks are guaranteed to get you in the summer spirit. If you’re after something grungier however, No Teeth are experimental rock’n’rollers from the Toon. Their gravelly vocals and murky guitar riffs will have you fist-punching and teeth-gritting with pained appreciation in no time.

The act of the day for me, though, is Peace – an indie-rock quartet based out of Birmingham. No strangers to touring, the band also supported the Libertines for their reunion show at Alexandra Palace back in 2014 and are now undoubtedly headliners in their own right. Their most recent track ‘You Don’t Walk Away From Love’ is a candied, feel-good anthem that conflicts with the throbbing, heart-wrenching lyrics of the 2017 release ‘From Under Liquid Glass’. Both are equally enthralling, signifying that Peace write songs just as well heartbroken as they do in love. And I’m dying to hear the new music. Pre-order the new album that’s due out the day before their gig at Meet the North, so you can memorise at least one of the tunes in advance. And justify the merch purchase on your way out.

On the big day itself, you can experience a lengthy line-up of artists in a variety of venues across the city. Get up close and personal in the smaller spaces of Jumpin’ Jacks and micro bar Box Social, where the likes of emerging singer-songwriter Holly Rees will be playing. Give her debut EP ‘Ilex’ a listen. Narc have called it ‘lovely stuff’ and I’m certain it’ll sound even lovelier live. This year, you’ll also be able to catch a few gigs at Brewdog in the city-centre. Acts start there at 2:15pm, perfect for some afternoon delight: pre-drinks and pizza.

I can fully recommend finding someone to see in The Mining Institute, a Victorian library filled with incredible wood and stone carvings, historical paintings and 19th Century furniture. The building features a vast glass roof, stunning stain-glass windows and acoustics that’ll make you melt. My favourite music moment so far is getting to see Chinah in this shadowy, magical venue. Fine Glindvad’s ethereal vocals and effortlessly cool stage presence couldn’t have been better suited to the spiritual surrounds. The room’s Gothic interiors added an extra level of intensity to the tracks that had seeped under my skin from the first listen.

This year, my suggestion is Australian alt-folk artist Riley Pearce, who’s vocals range from airy to earthy and who’s tracks leave you longing for campfire, guitar-soundtracked nights on the beach. But, this beautiful venue will have to do.

There's been a refreshing new wave of anti-pop princesses recently. Some favourites of mine are Mø, Kiiara, Bülow and Billie Eilish, who each have a unique form of raw, self-assured vocals served up from an under-current of deep electronica and dirty melodies. I also love Terror Jr – who create what I can only describe as poisonous pop; drug-fuelled and oversexed, delivered by a disturbing combination of a breathy, bubblegum voice that talks of taking your face off and ‘tongue kissing til we need stitches’. In a similar veign, I’d look forward to Emily Burns, who will deliver some tasty electro-pop without the sadomasochism with a half-hour set at the Institute from 4.30pm. And over at Riverside, Pale Waves will take control of the 6:45pm set. Lead singer Heather Baron-Gracie is both a sight and sound to behold. Black lipstick, black hair and black lyrics. The band’s blend of sparkling 80s synths and spirited riffs with emo lyricism is reminiscent of their labelmates, The 1975 and appeals to my appetite for clever contradictions and dark pop.

Other venue highlights include the Boilershop, a Grade II listed building steeped in history from the Industrial Revolution. It’s an exceptional space, airy as well as industrial with pendant lights hanging from the exposed rafters. The Town Wall gigs will take place in the basement and cinema room of the Georgian building, where I urge you to take a trip to catch Amsterdam-based Pip Blom, best described as “an exceptionally talented lo fi rock monster.”

St Nicholas Cathedral joins the venues on offer this year, where I imagine Tom Walker’s raspy ballads and gorgeous acoustic riffs will sound incredible. And if you really want to fit in with the locals – and this unashamed fangirl – head to the Boiler Shop at 4:20 to see Geordie favourites The Pale White, who graced the BBC Music Introducing Stage at Glastonbury in 2017. Adam Hope is a natural frontman and hard to take your eyes off when their thumping, guitar-heavy hooks hit. Even if you haven’t heard their songs before, you’ll be singing along subconsciously before you know it. Dress code suggestion: dark denim and dark shades.

Head to the Hit the North website, where you can get single tickets for just the opening parties, Meet the North tickets or full weekend ones. Obviously, I’d advise going for the whole hog and cramming in as much as you possibly can. I can guarantee you’ll be googling lyrics and gigs for artists you’d never heard of as soon as you get home. Or at least by midday the day after. Give me a shout if you attend. Would love to find out how you get on.

All images are from the Hit the North website