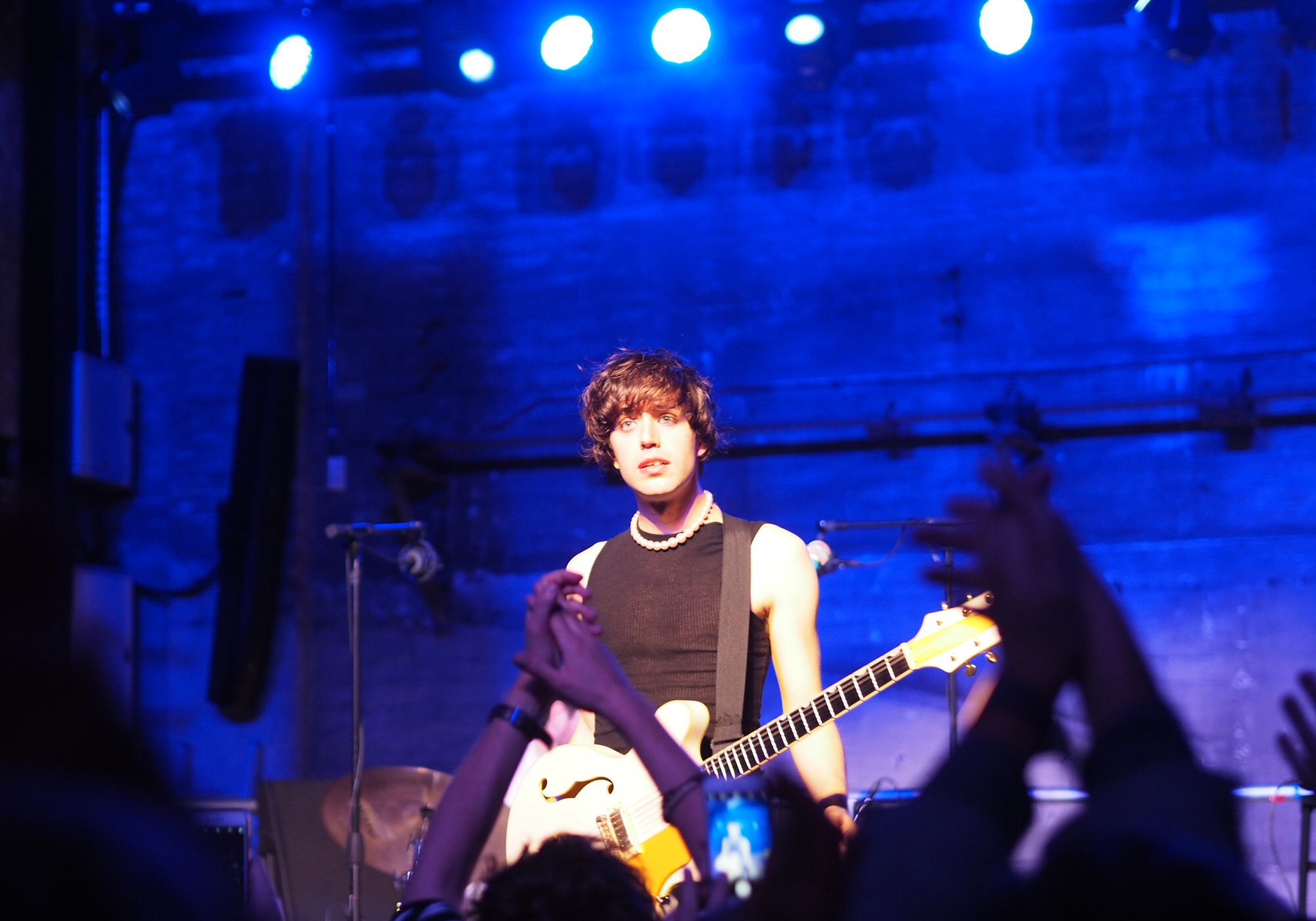 "Hi." He says. In a voice that is almost imperceptible, child-like.

"Oh, bless him." The girl next to me coos to her partner. "I feel so sorry for him. Look at him! He's so nervous."

I smiled knowingly to myself. This was my third time seeing Furman live and I knew what was coming. I could sense the ferocity inside him waiting to unfurl and already hear that raspy growl about to tear through his red-lipsticked lips.

The Visions took the stage before Furman did. One with a mullet, one with a maraca and all of them in white shirts which glowed under the misty purple beams of the Boilershop. Furman's entrance is graceful, deceptively shy, with a sly eyebrow raise to the crowd. A solitary "good evening" is uttered and he focuses with a nervous concentration on the microphone. His little black dress stands out a treat against the brilliant white shirts of the band.

OK, so the first song was shaky. A few lyrics were forgotten during the opening 'Cherry Lane'. But it's a wavering song of desperation and desolation that in a way warranted Furman's quivery and candid rendition.

But by the second track, Furman relaxes noticeably into 'Tell 'em All to Go to Hell' and as those red lips present a proud smile to the crowd, they too loosen up. "God that feels good. Got that out of our system." He grins to the fans, who cheer and clap appreciatively. "A fucked up, angry song now" he promises as new album track 'Maraschino-Red Dress $8.99 at Goodwill' creeps decidedly into the ears of the crowd. The opening electric riff resounds in the exposed rafters. Crunchy guitars and angry drums are greeted by undulant synths and horror-film-style screams.

'Sun is shining but I dwell in shadow', 'I am hideous and no-one can ever know.' Furman didn't begin dressing femininely until his mid-twenties, leaving him with that all too familiar feeling, the voice inside that screams: “there is no version of me that looks like the ideal I’m yearning for”. A pain which most likely every millennial can relate to. His latest album resonates with the unattainable visions of an overtly exaggerated sense of perfection that's forced upon us at every modern-day touchpoint. And that's why the lonesome drifters, underdogs and non-conformist crusaders continue to congregate adoringly at Furman's feet.

But despite the initial innocent greeting, there was nothing child-like about this performance. Furman is a blisteringly self-aware feast whose voice slides seamlessly from tender to a gravelly howl. With that inner belligerence laid bare, Furman casually declares: "This is our band and this is how we do it. Can't nobody tell us different." The crowd cheers and he smiles a sweet, genuine smile back at them.

Lowering his gaze to the crowd, soft and seductive, he flutters his eye lashes before sucking the words through his teeth with sheer grit and tenacity, straight into 'Lousy Connection'. The Visions rarely make eye contact with the crowd. It's an intense engrossment with music and emotion as the keyboardist flings his fingers across the keys and I was suddenly aware that the band had the same pained expression on their face as I did. But that great sort of pain when you really connect with what you're listening to and the person who's performing it.

Furman's smile has so many variations and contradictions. Sad, hopeful, seductive. He's impossible to take your eyes off. And when he thanks the crowd, the "thank you" is often half finished. Other times it's entirely silent and you only catch it by keeping your eyes on that smile. "Thank you for staying with our band as we get weirder, we appreciate it."

During 'I Lost My Innocence', the lyrics "I'm a little creature and they can't catch me" sum up this fierce, hostile and provocative little creature who has the ability to make you feel the pain in his haunted head and just as quickly marvel at the rapture of his defiance. His anguised lyrics are discordant against cheerful sax riffs and doo-wop accapella. The same unfathomable contradiction resonates with Furman's personality. His sweetness is tainted with sarcasm and you never quite know where you stand. "This is beautiful to me." He says. "My favourite thing to do." But then - "My favourite thing to do on Wednesdays."

My favourite thing about gigs is discovering that one track that you've half-listened to or even skipped that you then hear live and immediately become obsessed with. That's what happened to me during 'Ordinary Life'. Even when the light hit me in the eye I couldn't even squint. I was fixated. Furman's every breath and inhale is planned for maximum impact. And it works.

"This is a song from the 90s that I liked when I was a kid and I like even more now," he says before a searing rendition of The Smashing Pumpkins 'Tonight, Tonight'.

In both 'Suck The Blood From My Wound' and 'God Lifts up The Lowly' Furman fights for gender fluidity and against social stigmas. 'We'll never make it on the main streets, they'll force us back into the alley ways'; 'Angel, don't fight it, to them you know we'll always be freaks.' But Furman makes you leave the audience desperate to be even a fraction of the freaks he speaks of.

An encore was indisuputable. And as Furman and The Visions returned to the stage, he says: "Thank you for caring about this type of band. No. I'm being too sheepish. We'll take what's ours." And the crowd roars with reverence.

After 'Teddy, I'm Ready' and 'I Wanna Destroy Myself', the set ends in delirium with 'Restless Year' and Furman turns to the crowd triumphant. "Good job." He tells us with a proud smile. And I feel like blushing. The pride of this "freak" is priceless.