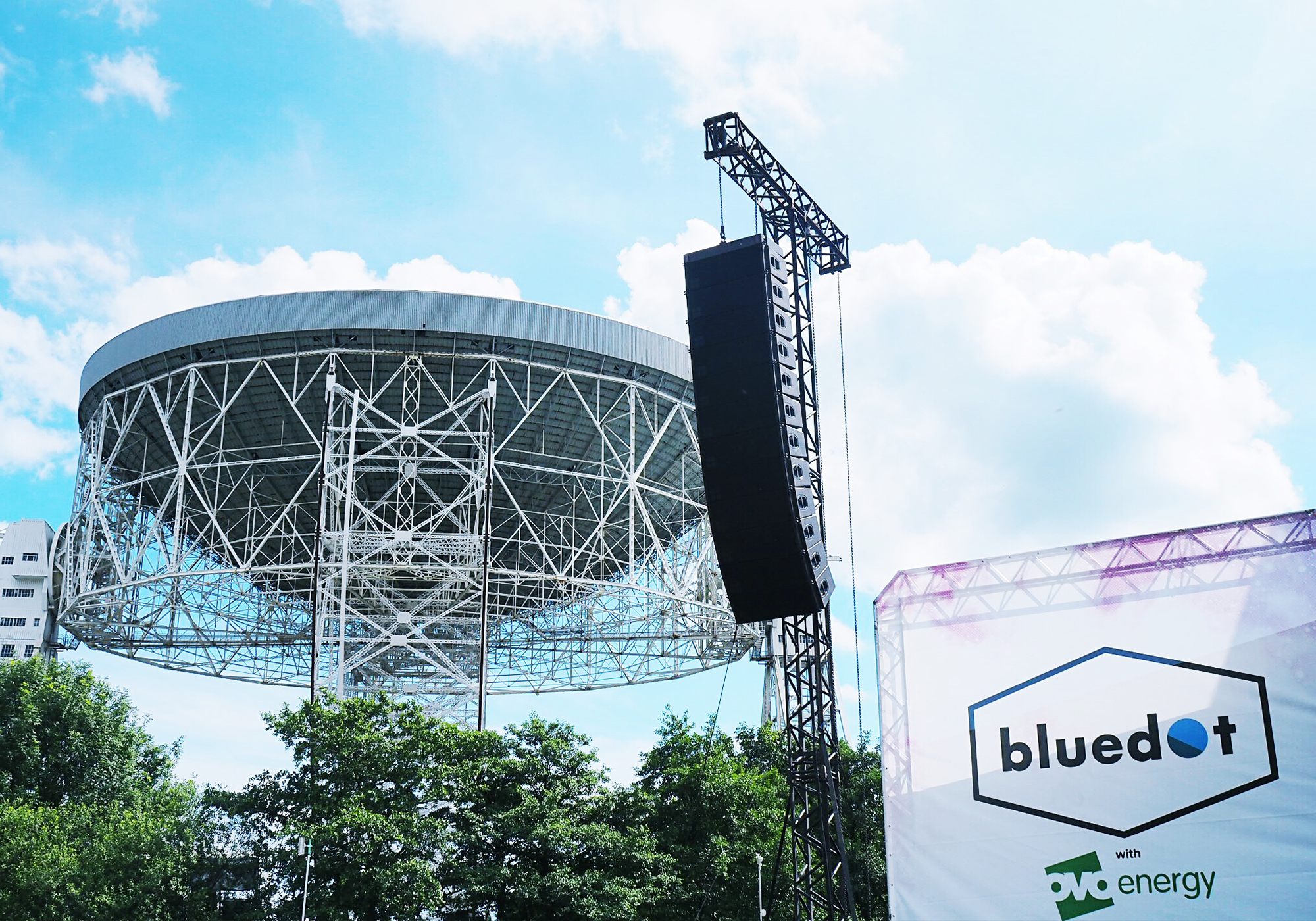 "...It has been said that astronomy is a humbling and character-building experience. There is perhaps no better demonstration of the folly of human conceits than this distant image of our tiny world. To me, it underscores our responsibility to deal more kindly with one another, and to preserve and cherish the pale blue dot, the only home we've ever known.” ― Carl Sagan, Pale Blue Dot: A Vision of the Human Future in Space

Professor Tim O'Brien celebrated 60 years of the Lovell Telescope by reciting an extract from Dr Carl Sagan's book, Pale Blue Dot. It was 5pm on Friday 7th July and I was at only the 2nd ever Bluedot Festival; gazing up at the Lovell stage, with the third largest steerable radio telescope in the world as its backdrop. Despite its infancy - and my festival naivety - I can confidently tell you that this is a weekend you'd want to experience for yourselves. Winner of 2016's Best New Festival, Bluedot describes itself as an 'intergalactic festival of music, science, arts, culture and the exploration of space.' Between us, me (Alt-J fan girl) and my (astrophysicist) friend brought with us the perfect amount of optimism. And - a few wobbly camping moments aside - we weren't disappointed. Here are my highlights - in no particular order.

As a self-proclaimed Alt-J fan girl, the sheer excitement of seeing them perform on the Sunday night was enough to perturb the onset of exhaustion that had crept in by the end of the weekend. I unashamedly cemented my spot at the front, with the band's merch T-shirt on. The hour and a half set was filled with tracks from both 2012 Mercury Prize winning album An Awesome Wave and their latest release, Relaxer. Everything was perfect - from Joe's extraterrestrial vocals, to the immersive lighting and their haunting, disorientating eclecticism. A flat-out sensory feast. For me, a flawless performance and for my friend, a firm fan was created. Not many acts would have topped this as a way to end the weekend and my first festival experience.

My first sighting of Johnny Rocket (lead singer of the Moonlandingz, real name Lias Saoudi) saw him milling around the crowd topless, covered in lipstick, feeding food to the front row that he would later use as hair gel that resembled vomit. The Moonlandingz are a side project and 'fictional fantasy' of rock band Fat White Family. I couldn't take my eyes off Rocket, or the female bassist who had the best stink face I've ever seen. And which conflicted deliciously with Rocket's anarchic, narcissistic, red-wine induced stage presence. I stared with equal parts lust and fear that they would catch me. Rocket made a plea to the crowd for ketamine and I saw a bloke point unashamedly to his mate, with whom Rocket made a date. But it would be a travesty to tranqualise that man. As a starting point, listen to 'The Strangle of Anna' to ease you in. It'll put you into an deep, tasty trance that will haunt you. Once you're convinced, Johnny's coarse vocals in 'Sweet Saturn Mine' and its dark hook "I don't feel alright!" will capture you. "Surrender now," he says. And you will.

If you ever get the chance to catch Dream Wife live, do it. I'd describe them as the Powerpuff Girls on acid. Cute, psychotic and hypnotic. Icelandic lead singer, Rakel Mjöll, is a sight to behold. Her taunting smile will both tease and traumatise you. Her juxtaposition is no better summed up than in 'FUU', which amalgamates Spice Girls' ‘Wannabe’ with the lyrics "I'm gonna fuck you up, I'm gonna cut you up". Guitarist Alice and bassist Bella are equally as entrancing. Each entirely unique and as talented as the other. Their enraged sound filled the tent and could turn Trump into a feminist. The threesome culminate their show by avenging "bad bitches" everywhere in the single 'Somebody', where Rakel solemnly declares "I am not my body, I am somebody". I left feeling exhausted and empowered. These girls are a force to be reckoned with. And I reckon you'd be sorry if you took them on.

"Fabulous! You're fabulous!" The woman next to me cries out as Ezra Furman takes the stage donned in red lipstick, pearls and a little black dress. But the instant affect of Furman's androgyny is just as quickly off-set by the rapture of his belligerent, gravely vocals. Fierce, hostile, provocative, he fills the stage and makes you feel plain in comparison. He casually thanks the "queers for coming" out to see him and - after a second - the "straight people too". The audience lap it up. Unhinged, "wobbly", but equally defiant, Furman fights for gender fluidity and skips seamlessly between musical and social boundaries. Without doubt you get insight into his "haunted head". His anguished lyrics discordant against cheerful sax riffs. To use his own words, a radically ambiguous and radically free performance. Complete with a rendition of Jackie Wilson's 'Higher and Higher', I was sold. And to prove it, I made an immediate trip to the merch tent. Ezra Furman & The Boyfriends now have a proud place amongst my gig T-shirt collection.

Goldfrapp, Plastic Mermaids, Shura, Ider and the Whyte Horses Experience were other favourites of mine. And there really was never a moment when you couldn't stumble into a tent or up to a stage and discover someone unique and awesome to listen to. Music aside, Bluedot was the perfect first festival. My friend - who has been to Glasto and Isle of Wight - assured me that the toilets were the cleanest she'd ever come across at a festival. There was a fab range of food options, with (originally named) Katsu's katsu curry being our stand-out fave and a good amount of bars (the Blue Moon tent being the coolest), which meant never having to queue for too long. Everyone there was super friendly. Me and my friend were referred to as "fabulous" by an approving passerby, which really was a compliment considering the eclectic array of imaginative, cosmic costumes that filled the fields over the weekend. The crowds were a blend of cosmologists, music lovers and fascinated families. There were science talks a plenty for those inclined and my favourite was Angela Saini's talk on 'how science got women wrong', based on her new book. There was something for everyone and I urge you in 2018, why not discover the Bluedot?

Have you been to any new or different festivals this summer? I'm already researching my next one. Tell me about them!